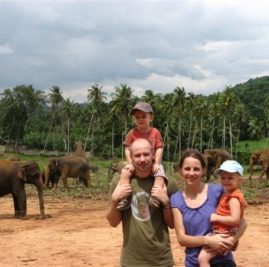 Daniel Kort’s life has been shaped by paper.  It first started when he was 14 and received a card from his Sunday school teacher that said the Lord has a special plan for his life.  The words on that paper took permanent residence in his thoughts and planted an unwavering seed for his life.  It would be pieces of paper that would direct his first steps into long term missions work and paper is very much part of his daily work today.

Daniel and Irene started their married life by writing the names of five countries they felt were in great need of Jesus on pieces of paper.  They folded them, placed them in a basket, and tossed them up in the air.  Their hearts thumped with excitement and anticipation.  When Daniel unfolded the chosen slip of paper, truth be told, his heart sank a little when he read it.  He didn’t know much about the country and his hesitation pushed against him so he suggested, “Let’s do it again!”  Once again, they threw the pieces of paper in the air and selected a new slip and once again the name of the same country appeared.  Doubts still cast its shadow across their faces when Daniel smiled and said, “All good things come in threes, let’s try again.”  They chose again and their fingers itched to open the last selection.  Daniel and Irene could not believe what they saw, they spoke aloud the name of the same country that appeared for the third time in a row – Sri Lanka.   For the next several years, every Monday, they would fast and pray and do research to understand what the country needed in prayer.

Two years later, in the fall of 2006, with their time at Bethany College ending soon, one of their professors approached them and asked, “What is your plan for mission?”  That professor was Tony Hedrick and with his outgoing personality, Tony was born to be an evangelist.  Fearing that Tony would guide them towards evangelical work and given that both Daniel and Irene felt better suited for more practical, behind the scenes work, they were skeptical when Tony continued to probe.   “Why don’t you join ACCI? We are partnering with a mission in Norway which you might be interested in and could be a good fit.”   The mission in Norway was with Literature Mission, and by the way, their printing factory is in Sri Lanka.  Daniel and Irene blinked in surprised and shared knowing glances when they heard this, their hearts immediately warmed and they knew God has made this path for them.  And that is how a name on a piece of paper led Daniel and Irene to a print shop on a tropical island in the Indian Ocean fifteen thousand kilometers away from where they stood.

The Lord had previously prepared Daniel with many short term missions from the farmlands of Pennsylvania with the Mennonites to the deserts and mountains of North Africa and the Lord continued to build his leadership skills when Daniel served as Assistant Director at a discipleship training center.  It was during these formative years that Daniel felt God’s acute and compelling presence. He recalls, “I experienced the Lord’s voice and guiding in a very close and personal way. There was a strong reality of His presence and this led me to fully surrender to the Lord and be open to be used wherever and whenever by Him. I could not imagine having a ‘normal’ life, where I just look out for my own good.”  True to those words written to a 14 year old so many years before, Daniel was vigilant to the Lord’s guidance for the plans for his life.

Daniel and Irene’s life would soon become far from normal when they landed in Sri Lanka with seven month old Josias and  two year old, Jocy, already an active toddler.  It was 2008 and Sri Lanka was still in the grips of a 28-year long civil war where explosions and suicide bombs filled the news reports.  Fortunately, the war only touched their daily life towards its end when a small airplane was shot down half a mile from their house, “it shook the windows and woke up the crying children.”  Daniel, despite passing a junction only 30 minutes before it was a target of a bomb blast, never felt fear for God had granted them peace and a sense of security.  But testing would come in other forms.

The print shop is located in a one story white building trimmed in blue with the Sri Lanka national flag flying above its front courtyard.  To combat the heat, individual AC units hug and surround the building. Inside, massive rolls of paper are stacked in groups of three with cut sheets stored on pallets that line the walls and in another room, boxes of finished products are wrapped, labeled and ready for distribution. The sounds and smell of a print shop is unmistakable and within its walls, Daniel learned about the machines with a thousand parts that moved in synchronicity and fed the cut sheets into the printing plates, then on to the folding machine and the collator, and then to be sewn and bound.

Daniel came to assist the Director and soon found himself dealing with staff issues, production delays, and unstable finances. He was drained at the end of each day which left little time to learn the new culture, navigate his new country and learn the language.  He reminds himself, “God is not withholding hardship from us, but He has the best intention for us.” At least one could argue that Daniel was being tested in the luxury of air-conditioned rooms. Irene confronted her own struggles as she tended to two young children with no relatives or close friends nearby for company or childcare support in a home with no air conditioning.  With dry and wet seasons battling each other, the weather and humidity became their biggest hurdle in their adjustment, noting that it took a full six months for the heat rash to reduce its anger on the children’s skin.


He and Irene soon came to treasure their new home and the culture, enjoying the national dish of rice and curry and a love for tropical fruits like mango, passion fruit, durian and rambutan.  He recalls, “We had much time together as a family and were able to embrace the culture. We were able to help people in their struggles and walk of life.” They found a good Bible-based local church where they became very involved and also made lifelong friends.  After five years in Sri Lanka, Daniel and Irene had left an indelible mark to those around them and this was affirmed when their pastor commented, “We appreciate your family so much, you guys are just like missionaries to us.”  Their church had not known they were missionaries and this further provided witness that they were fully walking on the path the Lord had laid out for them.  Daniel added that, “When we left home to Germany, the church blessed us and sent us out as missionaries to Germany.” 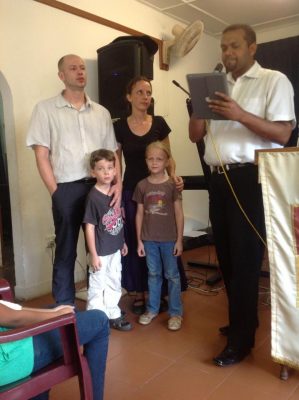 The local church in Sri Lanka commissions the Kort Family as they leave for Germany.

Daniel and Irene now serve their local church and lead the mission team with another couple.  While Daniel works full time for the print shop, it can be difficult to draw a direct line from serving in Christian Literature printing to the lives that are changed by its output. But Daniel recalls a treasured partnership with a mission leader to help bring bibles to minority or persecuted Christians.  It was under this cloak of secrecy and possible persecution that Daniel gained a new perspective on the scope and depth of those that worked courageously to expand God’s kingdom.  He thinks about his father from this experience and shares this amazing fact, “My father had also spent most of his life in a mission to print and smuggle Bibles to the underground Church in the Soviet Union.”  God had woven the thread of mission work in the form of paper and printing through this family line.

As part of his work, Daniel regularly meets with customers or missions to better understand their need.  He is a problem solver and it was on a trip to India that a thought he had led to an improved process for bible distribution.  At that time, New Life Literature was sending between 2 to 3 million copies of the Gospels of Mark and that year they had shipped 400,000 copies.  He had asked, “How long were these Gospels sitting in storage before they are distributed?”  Daniel followed the thread to his question, spoke to a number of leaders and learned that they had a network of 5,000 Indian pastors.  These leaders and pastors took on the challenge that if they are shipped 5 million Gospels a year, they would distribute them to their final destination within 3 months of receipt.  Daniel said, to accomplish their goal, they had created a system to examine the need of each district, the capability of each church or pastor and with 22 official languages in India, they needed to assess the demand of each Indian languages. This teamwork led to a significant improvement, “Now, when we send a container, it is now divided at the port and transported immediately into the individual locations.” This change in process reduced the time it took for God’s Word to be placed in a person’s hand and for a life to be changed.  Once again, Daniel’s fruits of labor intertwined with paper and his involvement with cross-cultural missions showed him firsthand what the Lord is doing worldwide.

Hebrews 10:35-36 says, “So do not throw away this confident trust in the Lord. Remember the great reward it brings you!  Patient endurance is what you need now, so that you will continue to do God’s will. Then you will receive all that he has promised”. Daniel shares this, “These two verses reflect a lot of my experience and goals as well. Patience and endurance is not what comes naturally but is needed very much. The confident trust in the Lord results into more patience and endurance. I want to see and receive all the Lord has promised and it is not a small thing.”

To learn more or donate, visit Daniel and Irene Kort’s page on the ACCI website. 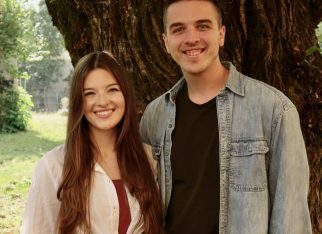